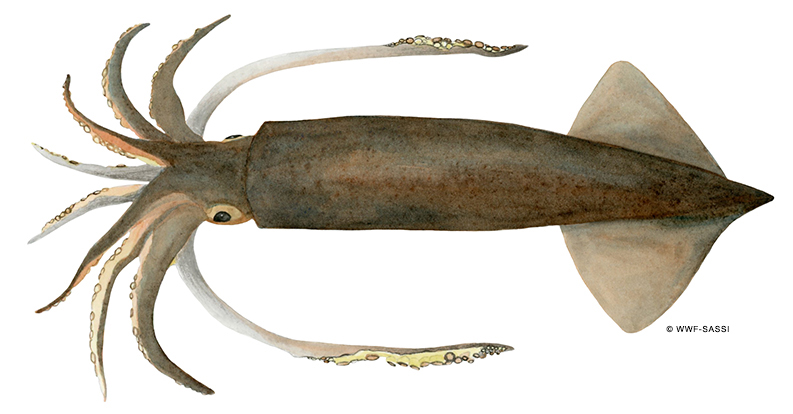 Japanese Flying Squid (Todarodes pacificus) are short-lived species that experience highly erratic recruitment and wide fluctuations of abundance The Japanese flying squid, is one of the most heavily exploited squid species in the world. Stock status of Japanese flying squid is currently unknown and very difficult to predict. Fishing mortality is currently above sustainable levels putting additional pressure on the stock.

Japanese flying squid are caught using jigs. The impact of the fishery on Endangered, Threatened or Protected species is unknown. Bycatch is also uncertain but thought to be low as the fishery target dense schools of squids.

Mechanized lines and pole and lines (jiggs) are deemed to be highly selective, therefore negative impacts on ETP species are not likely. Discards , and survival rates are assumed to be low. The potential impact on the ecosystem is unknown. Benthic impact on the habitat is considered to be low.

Japanese flying squid occurs mainly around and to the south of Japan and is fished by Japan, China, South and North Korea and Russia, with most of reported catches from Korea. Japanese flying squid are caught along the continental shelf and upper slope waters, from north of Japan into the Sea of Okhotsk and in the North Pacific heading east and imported into South Africa

There is no management system in place for this fishery and the lack of reliable fishery data raises some concern given the high level of fishing.

Considering the large size of the North west Pacific (FAO 61) and the non-existing collaboration on squid stock management between the countries, management of this fishery does not exist.

Jigs are coloured, plastic lures with barbs. They can be attached to a handline or in a series on a longline that is operated by machine. The jigs are dragged from fishing boats in a way that creates a jerking movement – making them appear alive. Jigging for squid generally happens at night using spotlights. Jigging has little impact on the environment and minimal bycatch.

Trawl nets are dragged through the water between the seabed and the sea surface without touching the bottom. As such there is little impact on the bottom habitat and its species, although sometimes the nets do come into contact with the bottom. Mid-water trawls generally aim to catch large schools of a single fish so the incidental bycatch tends to be low.