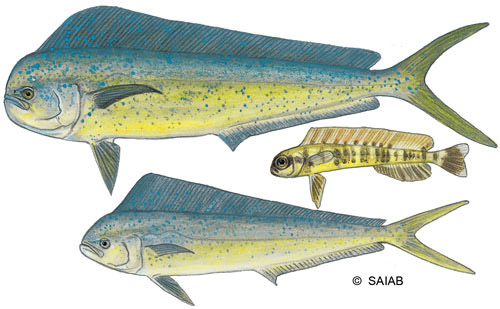 Dorado (Coryphaena hippurus) are fast-growing, widely distributed fish with a short lifespan making them resilient to fishing pressure. No stock assessments have been conducted for Dorado in South Africa. Stock levels in Eastern Pacific Ocean are uncertain with some indications that it is not overfished.

Dorado are caught using traditional rod and reel or handlines. In general, linefishing is a selective fishing method with few impacts on the marine environment. When fishing for resident reef fish species, the linefishery is likely to impact overfished, vulnerable or ETP species. However, when fishing for highly mobile pelagic species the impact is generally lower. Catches of un-managed bycatch species are moderate making up around 12% of the total catch.

Dorado are also caught as bycatch in the South African pelagic longline fishery. Pelagic longlines consists of a double-line system suspended at different depths covered in baited hooks and which are several kilometers long Bycatch is a significant issue in the fishery. Specifically, bycatch of seabirds, fish, sharks, and turtles are a major challenge within the fishery as many of these species are considered endangered, threatened, or protected (ETP) species. Catches of sharks by the fishery in recent years have increased substantially, with sharks making up more than 49% of the catch in 2017.

Dorado is mainly caught using pelagic longlines. Pelagic longlines consist of a double-line system suspended at different depths covered in baited hooks and which are several kilometers long. Catches of endangered, threatened or vulnerable seabirds, fish, sharks and turtles are considered to be a significant issue. Bycatch for this fishery appears to be low as well as catches of juvenile dorado. Discard rate and survival of discards is unknown. The fishery is likely to impact the ecosystem negatively due to the removal of key species. There is no impact on benthic habitats.

Dorado is caught all along the coast of South Africa Management for the sector is considered partly effective. In South Africa, this sector is principally managed through a total allowable effort (TAE) limitation. There is concern over the impact of the continuously growing recreational sector as well as uncertainties surrounding the allocation of small-scale fishing rights. Some steps have been taken to implement an ecosystem approach to fisheries (EAF) management including the recent addition of 21 new Marine Protected Areas which are likely to provide additional protection to several linefish species.

Dorado are caught by South Africa in the Atlantic and Indian Ocean. Tuna and tuna-like species and recently sharks are managed by Regional Fisheries Management Organizations (RFMOs). The Atlantic Ocean component is managed by the International Commission for the Conservation of Atlantic Tunas (ICCAT) and the Indian Ocean Component is managed by the Indian Ocean Tuna Commission (IOTC). Member countries or co-operating non-member countries are then responsible for ensuring the implementation and adaptation of the recommended quotas and regulations. Management by South Africa is considered largely effective as several steps have been taken to address the concerns around bycatch.

Dorado is a cosmopolitan fish found throughout the Eastern Pacific Ocean and imported into South Africa. As Dorado are often caught alongside tuna, it is managed as part of the Inter-American Tropical Tuna Commission (IATTC). Data collected is not always accurate and IUU fishing still takes place due to poor levels of enforcement. Parts of the fishery in Guatemala, Costa Rica, Peru, and Ecuador are taking part in Fishery Improvement Projects, aiming to improve monitoring and reduce bycatch of ETP species. However, management overall, is considered to be marginally effective.

A system of fishing line several kilometres long that is suspended at different depths and covered in baited hooks. Pelagic longlining can result in high incidental bycatch, including threatened species, such as sharks, turtles and seabirds. The issue of bycatch is being addressed for seabirds, but shark bycatch requires further attention. Pelagic longlines have little effect on bottom habitats.

A system of fishing line several kilometres long that is suspended at different depths and covered in baited hooks. Pelagic longlining can result in high incidental bycatch, including threatened species, such as sharks, turtles and seabirds. The issue of bycatch is being addressed for seabirds, but shark bycatch requires further attention. Pelagic longlines have little effect on bottom habitats.