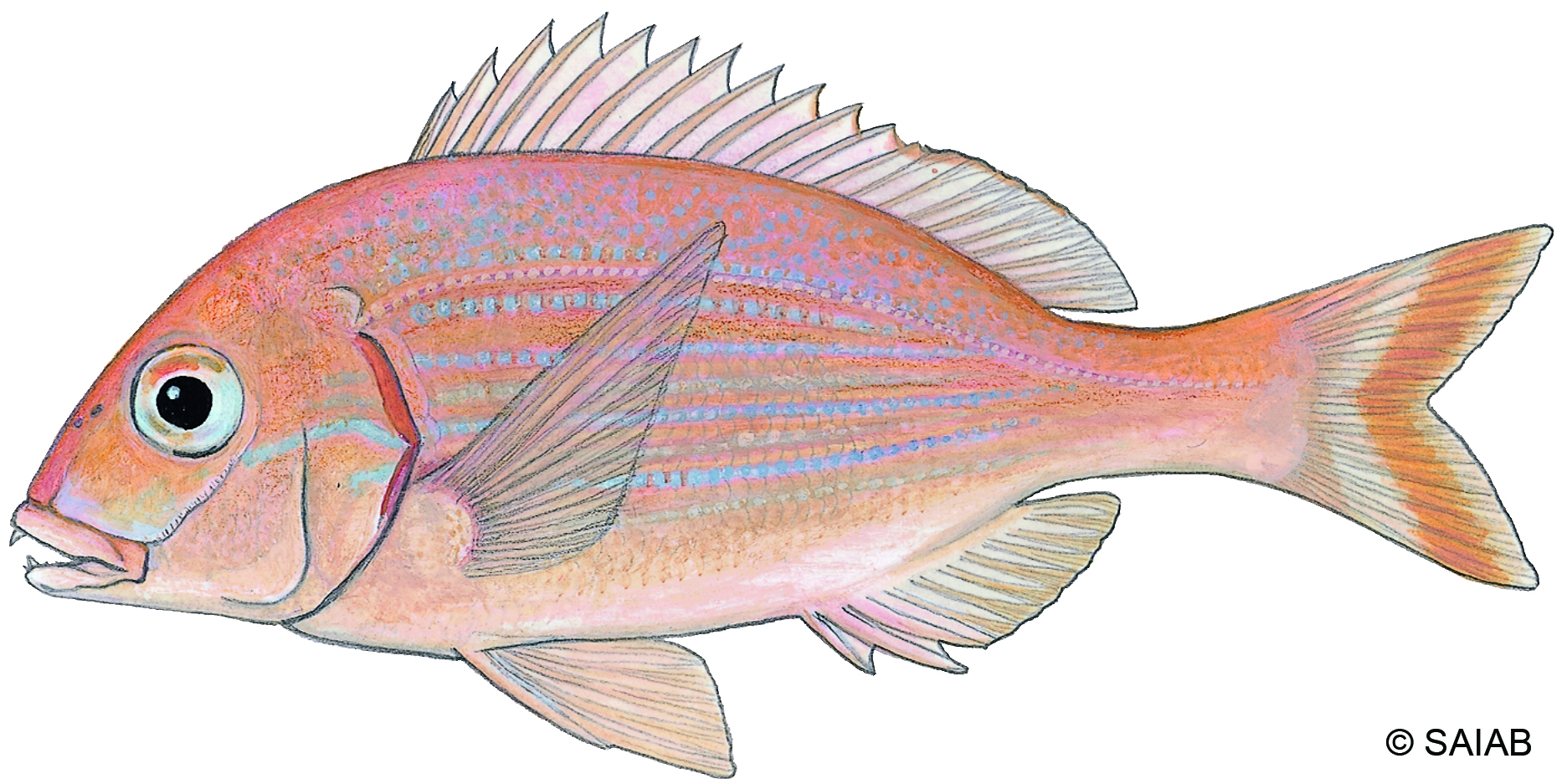 Panga (Pterogymnus laniarius) are endemic, schooling fish that spawn all year round making them relatively resilient to fishing pressures. They are found around low and high profile reef, and sandy or muddy seabeds around 20-230m depths. No recent stock assessments have been conducted so the current stock status is unknown.

Panga are caught using the traditional rod-and-reel method of the linefish sector. Linefishing is a relatively selective fishing method which targets a large number of species many of which are reef-associated but also includes a few pelagic species. When targeting pelagic linefish species, the linefishery is not likely to cause significant damage to overfished, vulnerable or ETP species, which are nearly all reef-associated. The reverse is true when targeting for reef-associated linefish species like Panga. The fishery has few discards and there are very few “non-target” species landed in the sector.

Panga are caught as bycatch in inshore trawl fishery for hake (MSC certified) and sole using trawl nets. In the inshore zone, trawl nets are dragged along the sea bed at depths in the area from the coast to the 110m isobath or to 20 nautical miles from the coast, whichever is the greater distance. Demersal trawling is known to damage the seabed; the extent and impact of this damage remains unknown. This methodology is not selective, however, and a number of other benthic species are often caught in the nets as well. Seabird bycatch was highlighted as an issue and the subsequent introduction of tori lines (lines covered in coloured streamers making attachment lines more visible to birds) has led to a decrease in bird mortalities.

Panga are caught as bycatch within the within the offshore demersal trawl industry for hake using trawl nets that are dragged along the seabed at depths typically ranging from 110 m to 800 m (known as “demersal trawl nets”). This type of trawling is known to damage the seabed; the extent and impact of damage remains unknown. Trawling is not a very selective fishing method and a number of other species are often caught in the nets (fish, sharks and rays). Seabird interactions with trawl cables near the surface are also a major concern. A success story in the fishery has been the implementation of effective seabird mitigation strategies developed in connection with the MSC-certification process. These strategies have resulted in a dramatic reduction in seabird-fishery interactions through the introduction of tori lines (lines covered in coloured streamers making trawl attachment lines more visible to birds) and improved disposal of offal (discards that attract seabirds).

Panga are mainly caught within the inshore zone along most of the South African coastline on small skiboats. They are also caught recreationally along the coast from Yzerfontein in the Western Cape to the Transkei in the Eastern Cape. Management for the sector is considered partly effective. In South Africa, this sector is principally managed through a total allowable effort (TAE) limitation and there are additional restrictions to protect overfished species such as bag limits (10) for recreational fishers. There is some concern over the impact of the small-scale fishery rights allocation beyond the recommended TAE and the continuously growing recreational sector.

Panga are caught between Cape Agulhas and the Great Kei River at depth shallower that 110m. Management is considered to be partly effective. Management is mainly directed at the target species hake (MSC certified) and sole in the form of Total Allowable Catch (TAC) and permit limitations. Some ecosystem-based management measures have been implemented, such as the use of tori lines to minimize seabird interactions and limited fishing areas. A fishery conservation project (FCP) was developed to test a co-management approach for 10 non-target species in the sector. Other concerns include the lack of information on impacts to sensitive shark, skates and ray populations as well as impacts to the seabed. Efforts are underway to improve the scientific observer coverage at sea for this sector to better understand ecosystem impacts.

Panga are caught as bycatch on the continental shelf edge and upper slope along the West Coast from the Namibian border southwards and on the South Coast primarily around the Agulhas Bank. Management is mainly focused on the target species (hake) in the form of Total Allowable Catch (TAC) and permit limitations. There are some ecosystem-based management measures in place such as precautionary catch limits on monkfish and kingklip, tori lines to reduce sea bird interactions, and limited fishing areas (i.e. fishing within a “footprint” to limit seabed disturbance). Research is underway to better understand impacts to seabed habitats. There is however, little information on impacts to sensitive shark, skate and ray populations.